I attempted sourdough bread once in my life prior to the COVID-19 pandemic. It was an epic fail. As in my dad attempted to use a table saw from the woodworking shop to cut it. Whoops.

But someone offered to mail me dehydrated sourdough starter, and we're spending much more time at home. So despite spending much more time working, I'm able to work on sourdough projects that require a lot of time but not hands-on and not all at once. Thus far I've baked bread, pizza crust, cinnamon rolls, biscuits and I have a double batch of bread and English muffins chilling in the fridge to bake tomorrow. (Fun fact: English muffins are "baked" on a griddle, not the oven.)

These cinnamon rolls from The Clever Carrot are delicious. I made a double batch, which was no less work, so I was able to share with three different families and still have plenty for our family. That's good because both boys devoured their first and wanted seconds. Me? I ate two and was still so full that I didn't need lunch. Apparently they're delicious and satisfying.

During my final proof, I used my oven, which was a touch warm and melted some of the butter, cinnamon and sugar down to the bottom of the pans. It wasn't the end of the world as it essentially made them cinnamon rolls with a touch of caramel roll on the bottom.

Note: A scale is extremely helpful for these sourdough recipes. 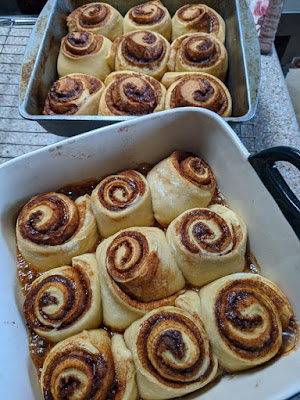 Warm milk and 2 Tbsp. butter in a shallow pan or microwave, and cool slightly before using. Add the egg, starter and sugar to the bowl of a stand mixer. Mix to combine, and then slowly add the warm milk mixture. Add flour and salt, and continue mixing until a rough dough forms. Cover with a damp towel, and let rest for 30 minutes. After the dough has rested, switch to the dough hook and knead for 6 to 8 minutes until dough comes together. Place dough in a greased bowl, and cover. Let rest for 30 minutes. Repeat this 4 times, turning the bowl as you go. This aerates the dough and makes it feel soft and supple. Cover again, and let rise 8 to 12 hours or until doubled.

The next morning, lightly oil and flour your counter to prevent sticking. Gently coax the dough out of the bowl. Stretch and fold the edges toward the center to deflate some of the air. Using floured fingers, flip the dough over and let it rest 15 minutes. Line a 9-inch pan with parchment or grease it well. Lightly dust the surface of your dough with flour and rolling pin. Roll the dough into a 16 x 12 rectangle. If dough doesn't roll out well, let it relax another 10 minutes and try again.

Melt remaining 2 Tbsp. butter in a shallow pan or microwave. Combine cinnamon and sugar in separate small bowl, and set aside. Brush dough with butter, all the way to the edges. Sprinkle the cinnamon mixture evenly, leaving a half-inch border around the edges.

Gently roll the dough, working on the long side of the dough, into a tight roll. Cut into 8 even pieces. Place in the pan, and let rest 1 to 2 hours or until puffy. (You can let the dough rise one hour, and then chill covered overnight.)

To bake the rolls, allow them to come to room temperature. Preheat your oven to 350°F. Place the dough on the center rack, and bake 40 to 45 minutes. Cool for 15 minutes, and then make the glaze while they're cooling by beating together all the ingredients. Glaze the rolls, and enjoy while still warm. Makes 8 rolls.
Posted by Kerry at 9:55 PM

Kerry
Originally I created my first blog as my virtual recipe box. Although I still use it for that purpose, it's also a platform for me to share my culinary creations (or copycats) with others. I left an extremely stressful, challenging and rewarding job as the HR director of a non-profit organization for an equally challenging and more rewarding position as my son's favorite toy. I now have two sons, one of whom has an extremely rare genetic disorder called Multiple Congenital Anomalies-Hypotonia-Seizures Syndrome 1.

A Few of My Favorite Things