I swear, there's nothing quite like homemade bread. There's something about the process of making it as much as the the devouring of it that is comforting. Perhaps it's just the ability to create something so delicious with relatively minimal effort for a bread like this from How Sweet Eats.

I made this bread within a week of seeing the recipe posted. It's delicious straight from the oven, still warm with chewy crust. It definitely diminishes in quality the following day, although I think a quick pop in the oven (or using it for grilled cheese) would likely give it new life.

Now I really want to make this honey oatmeal bread again ... it was the first bread I remember baking. 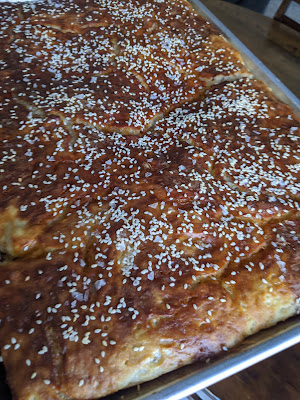 Stir together the flour, salt and yeast in a large bowl. Slowly add in the warm water while stirring constantly until a sticky dough forms. Once the lumps are gone, cover it, and place in a warm spot to rise for 1 to 2 hours, until doubled.

Brush an 18 x 13 pan with 2 Tbsp. of the melted butter. Drizzle on the oil, and spread evenly around the pan. Turn the dough out onto the pan, and press it out with oiled hands until it covers the pan completely.

Place the baking soda in a large bowl, and add the boiling water. (It will bubble, hence the larger bowl.) Brush the mixture on top of the dough, reserving some for later. Then place the pan in a warm place, and let it rise again for an hour.

Meanwhile, preheat the oven to 475°F. Brush the dough again with the baking soda mixture. Bake for 10 minutes. Remove the pan, and brush the dough with the remaining melted butter. Sprinkle with salt and sesame seeds. Bake another 10 to 15 minutes until the top is golden and edges are a bit crisp. Let the bread cool slightly before slicing it. Makes 1 large focaccia loaf.
Posted by Kerry at 7:59 PM

Kerry
Originally I created my first blog as my virtual recipe box. Although I still use it for that purpose, it's also a platform for me to share my culinary creations (or copycats) with others. I left an extremely stressful, challenging and rewarding job as the HR director of a non-profit organization for an equally challenging and more rewarding position as my son's favorite toy. I now have two sons, one of whom has an extremely rare genetic disorder called Multiple Congenital Anomalies-Hypotonia-Seizures Syndrome 1.

A Few of My Favorite Things